Luis is the Owner of Texas Wolverine All-Stars as well as a head coach for 23 seasons. Coach Luis has over 25 years of cheer-leading and tumbling experience and also specializes in elite power, and specialty tumbling passes. Luis has received over 150+ National titles with TWA Level 1 through Level 5. He has choreographed countless routines starting from elementary level to collegiate level athletes. Luis was part of COA staff for 2 years and also cheered/choreographed with the San Antonio Spurs Coyote Crew. 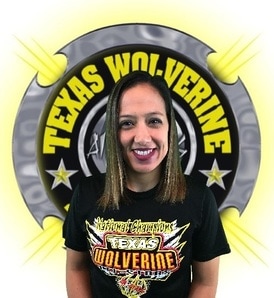 ﻿﻿﻿Coach Claire
​Claire has been with TWA for all 23 seasons we've been open! Claire has over 30 years of cheerleading experience. She has been coaching for over 23 years. She is a former member of COA Staff for 2 years as well as a member of the San Antonio Spurs' Coyote Crew! A graduate from Lanier High School where she also cheered as a varsity cheerleader. After high school, Clarissa attended Palo Alto College and the University of Texas at San Antonio.

Coach Alex
Alex is from San Antonio and a  long time TWA  athlete. After graduating from Fox Tech High School, he cheered at the award winning Navarro College. Alex has also cheered at other programs including - Cheer Athletics, Spirit of Texas,  and Dynasty, along with being apart of  COA Staff.   He has over 20 years of cheerleading experience, with 15 years of coaching experience.

​​Coach Alex enjoys all parts of cheerleading!
Coach Andrea
Andrea  has been cheering for 12 years and joined TWA in 2014, being apart of teams from levels 1 to 4.2.  She cheered in high school at South San (2019) all four years, serving as Co-Captain for the 2017-2018 school year.   Andrea has been apart of staff since 2019, while having four years of coaching experience.

Charles began as an athlete with TWA in 2011 and began coaching in 2016. Being a long time athlete at Harlandale High School and San Antonio College. He brings skills from stunting and has also had his children in our all-star program as well.

Coach Charles' favorite part of all-star cheerleading is tumbling and advanced stunting. He is also one of our boxing instructors.
Coach Dez
Dez a long time athlete and coach of TWA has been with the gym since the opening and cheering altogether since she was 7. Being  member of the McCollum High School Cheerleading team and ending as Captain her senior year. After high school, Dez tried out for the University of Houston cheerleading team and made it. She has also been apart of NCA and COA staff, doing High School and All-Star camps and competitions. Her awards consist of All-American for over 12 years and Top All-Star 7 years in a row.

​Coach Dez's favorite part of cheerleading is stunts and dance!
Coach Doug
Doug is a long time cheer athlete and has 18 years of coaching experience. He cheered competitively in all-stars at TWA. Along with cheering  at Highlands High School where he graduated, then attended Palo Alto College.

Coach Doug's  favorite part of cheerleading is tumbling and jumps!
Coach Janice
Janice is a long time athlete of TWA. She began at the age of 8, joining the  staff here at TWA in 2010. Graduating from Lanier High School in 2011, cheering as a varsity cheerleader 2009-2011 and followed a career in cosmetology  and graduating from Ogle School of Hair, Skin and Nails.

​Coach Janice's favorite part of cheer is jumps and dance.
​Coach Marissa
​Marissa has been a long time athlete at TWA, having 15 years of cheerleading experience and 3 years of coaching experience. She graduated from Brackenridge High School (2019)   and served as Captain her senior year.  Marissa currently attends  The University of Texas at San Antonio, while cheering at the collegiate level for her university.

Coach Stasia's favorite part of cheerleading is stunts!
Coach Stefon
​Stefon has  been  cheering  for 5 years, while coaching for 3 years. He  cheered and graduated from Edison High School (2018) then went to cheer in college at Carroll University in  Wisconsin.

Coach Stefon's favorite part of cheerleading  is seeing a routine come to life!
Coach Susie
Susie another long time athlete of TWA since 2002. She began cheerleading in middle school and continuing  at Southwest High School. Susie began as an athlete  with our program in 2006 and has now become apart of our amazing staff.